Most people have a love-hate relationship with bacon. For some, it’s a religion. For others, it’s an unhealthy obsession.

The thing is, bacon is actually fairly nutritious, and if cooked properly and eaten in moderation, it can be a healthy addition to your diet whether you’re backpacking or need a quick snack at home.

Dehydrating bacon is one way to get more mileage from your meat. Here, we’re breaking down what you need to know about how to make jerky.

Can You Dehydrate Raw Bacon?

First, let’s address a basic question: should you dehydrate raw bacon or should you cook it first?

While dehydrating meat makes it shelf-stable (can be safely stored without refrigeration) the USDA is pretty clear on the subject. When you dehydrate uncooked meat at home, pathogenic bacteria are likely to survive the lower temperatures of a dehydrator.

In order to dehydrate the meat instead of baking it, the bacon goes into an oven or dehydrator at 130 to 140 degrees Fahrenheit for about six to eight hours. That’s within the danger zone for bacteria that cause food poisoning.

So, if you want to make safe and healthy jerky at home, it’s generally best to cook the bacon first.

Now that we’ve cleared that up, let’s talk about how to dehydrate bacon to make bacon jerky that will be a huge hit with your buddies — and your four-legged friend too!

There are several different ways you can cook bacon. Some people (often college students) cook a few slices in the microwave, while others swear by the oven. But the classic way is on the stove.

Either way, you should cook the bacon through until it’s crispy. After it’s cooked, make sure to pat the bacon dry and drain well. Any excess fat that’s left on the bacon when it goes in the dehydrator could become rancid.

Once your bacon is cooked and dry, arrange it on the dehydrator sheet and apply your seasoning.

Ideally, this should be a dry rub — extra moisture means more work for your dehydrator. You can make it sweet (brown sugar) or savory (garlic powder, black pepper, and chipotle powder).

Either way, you can’t do what you normally do with a dry rub and overapply it. Instead, sprinkle it on gently.

Once you’ve lightly seasoned it, it’s time to dehydrate your bacon.

Luckily, this is pretty simple: put the tray in the dehydrator and turn the machine on. The bacon should dry out for six to eight hours. Twice during this process, you should remove the bacon and pat off any excess fat.

If you’ve never used a dehydrator before, check out this guide.

Once the bacon is done, allow it to cool completely and store it in a sealed container or bag.

And there you have it! Your very own bacon jerky.

Love Your Bacon Jerky? Get a Jerky Dehydrator

If you love jerky and dehydrated foods, why not splurge on a dehydrator so you can start dehydrating bacon at home?

Luckily for you, we’ve already done the hard part for you. Check out our picks for the best dehydrators to find one that meets your needs. 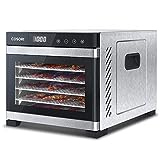 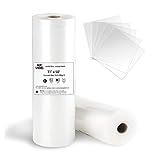